For those of you who don't know, I do a lot of work with area rescue groups.  Mainly, I often offer my kennel as a halfway house for dogs who don't yet have a foster or a forever home.  Occasionally this also involves training them or grooming them.  In addition to that, I serve as an adoption screener, meaning I screen applicants who are interested in a dog to see if that dog is a good fit for them.  This means I have a lot of interaction with people involved with a rescue.  Some of them are looking for a new dog, some of them are surrendering their current dog.  Some of them are tearful because they want to be able to keep the dog but just can't, some of them are matter of fact that the dog isn't a good fit, and some are finding a home for a dog because the dog's owner is too sick to care for the dog himself/herself.  Today was the first time, though, that I became physically ill when I saw the state of the dog.

An owner came in today to surrender her dog.  She said it was a poodle mix, and that her employment situation just didn't allow her to care for her dog the way she'd like (something I'd heard many times before).  She said he hadn't been groomed for a while, and he had a few bad matts (again nothing new).  This is what she brought in: 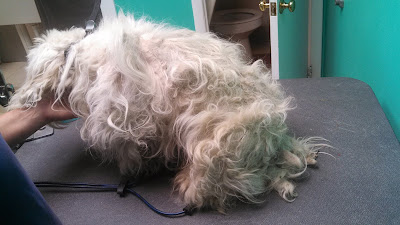 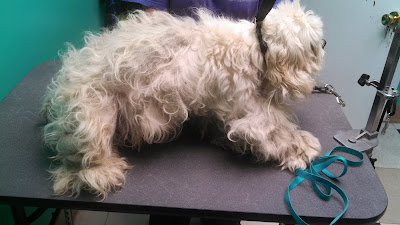 The matt on his back alone weighed about a half pound.  His legs were so matted that he couldn't walk.  He had a matt that connected from the bottom of his neck to the back of his front leg, so even standing was painful.  During the grooming process, there were a few times he yelped in pain because simply trying to stretch out his leg hurt him.  Even through all that, though, he was friendly.  He didn't try to bite. 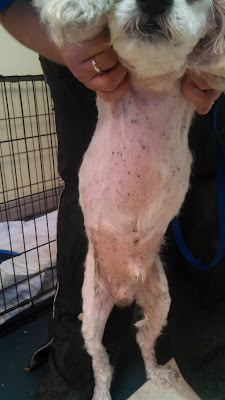 When we were done with the shave down were were left with what you see above.  Each black speck is a tick.  His paws were worse, and he had many ticks between each toe.  As we were shaving, at one point we shaved a huge matt of his ear.  It wasn't just a matt, though.  It was, in fact, a tick nest.  Hundreds of baby ticks had hatched on him and were making their home. 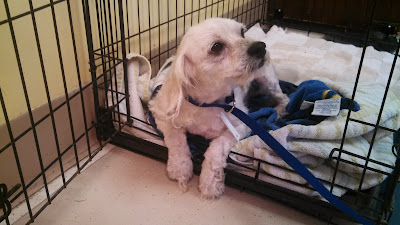 This sweet boy has been living outside for at least a year (probably more).  This sweet boy did nothing to deserve this treatment.  He was friendly and sweet.  He was a little nervous, but he was patient with us.  At this point, we're only partially done with his intake care.  The next step is to let the tick medicine do its trick and to finish grooming him.  We also need to administer vaccines to him since the only one he's had in the past 5 years is Rabies.  Chances are he has a tick-born illness which will require some fairly costly meds, and I can only hope that he doesn't have heart worms.

In the few years I've worked with rescues, I've seen some pretty desperate situations.  This week alone I saw two dogs, emaciated, whose owner had run out of dog food and had essentially quit feeding them; I saw a dog who had heartworms, lyme disease, and ehrlichia all because the owner hadn't given it preventative meds; and I saw a dog, terrified of everything, either because it had been beaten or because the owner just hadn't taken the time to socialize it.  Still, none of that compares to this.  This is more than just neglect.  This is more than just an oversight.  This is flat-out abuse.  This dog was in so much pain he could not walk...all because someone had refused to take a brush or a pair of scissors to him.

The problem is, there are so many dogs like him.  There are so many in shelters and in bad homes.  They need help.  They need someone to care for them, to love them, to play with them.  Rescues need fosters and donations.  If you're looking for a way to help, contact your local rescue, or contact me.  There's no reason for dogs like this little guy to stay in this situation.  We can help them.  You can help them.